2008 07 31
…a frustrating ride to the BOMA
…left stuff at Dist. ED Ext. office, the went to the market where the one time I hadn’t brought any plastic bags they were out of them
…came back and was going to work on my laptop but the power was out. I guess the power always goes out at lunch time.
…Tried to buy popcorn but it was dilibe at all the stores. I did find a tea strainer that I will use for the non-instant coffee grounds I bought (although first I need to use the stuff I brought with me from the states)
…power finally came back on and I charged and added more podcasts & music to ipod
…was about to leave when I got a call from my banja mu America who were on vacation in Maine. Maine is great and this will be the first year I haven’t been there since I was born, something I can’t say of anywhere else. They were doing the usual things we do in Maine and I guess the blueberries are great this year. The phone call needed to be short because they were calling on their cell phone
…went to the post office but it closed at 1600 so I biked back. I hadn’t put on my bike shorts so my nether regions were very sore by the end

…woke up pa 530 went to meeting about sanitation and had a free lunch at the gov. guest house

…waited around at the Dist. ED ext. office and checked email on my phone but couldn’t blog because connection was to slow and I had to view a variation image to use mobal blogging – somewhat discouraging

…biked back and got there as dusk was falling

2008 07 25, 26
…went to dimba and the person I had asked to water had & also fertalized which was sweet
…planted tomatoes & tephrosia which I had gotten from the PCPH

…packed everything up had lunch and took a taxi to the taxi rank, where there was a taxi to Chadiza which was great except it took about three or more hours before it left so I didn’t get home till dark

…bus ride took about 9.5 hours (700-1530) most of which I spent listening to some of the podcasts I had downloaded

…got to Chipata, took taxi to PCPH and I think the power was out so just hung around, although I might have done something else

Am in Lusaka today although will be on the road to Chipata early tomorrow. According to the dentist, the reason my gums have been hurting is because I have been brushing too hard. She prescribed a mouth wash that I am supposed to use after every meal until it get used up and said that I need to brush more… although apparently lighter. Hopefully her prognosis is correct. All this was yesterday. Today I met with Ba Donald, my APCD (Associate PC Director, the head of the life program), and we discussed getting a three wheeled vehicle. Then I tried for a final time to get internet on my phone, going first to one cell phone company (MTN), where it wasn’t successful and I guess they don’t even do email so it wouldn’t be that useful anyway. Then I went to another company (Celltel) where, low and behold – SUCCESS! So I will now be posting a lot more. Put 23 fairly large sized photos on my blog site (see below), couldn’t put them on http://www.otherrealm.org because the Wi–Fi at the Lusaka office needs some parts, but it was nice to have a fairly fast connection with unlimited band width, even if it was on a government computer that doesn’t let you do anything. A longer blog detailing the past two weeks still hopefully to come. Till then! The market where I buy my zakudya (food) This Landover is on its last ride 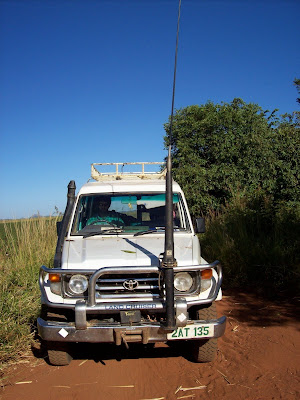 The trainees move to where our home stay families will be When I arrive at my home stay site, I am greeted by a rainbow Me with where I had tech training in the background Just one of countless sunsets A meal at first site visit And the journey begins 2008 07 20
Got up at 345 and got to the bus stop at 515. I was slightly worried when I got there because there was no one there, but I called a number that was on a flier at the stand and he said he would be coming shortly. The bus left at 600 and got there at about 1530 (9 ½ hours if you don’t want to do the math) then I got a taxi to Shopright, bought some good granola, powdered skim milk 1kg of peanut butter and maybe a few other things that can only be found here in the capital. I then walked, carrying my hiking backpack loaded down with everything I brought with me from Chipata plus everything I had just bought, the kilometer or so to Arcades, the other mall, because I remember the grocery store there had good bread. Well they were all out of whole grain just about everything, although I finally bought some whole wheat buns. Spar is basically Shopright except everything is more expensive. Got a taxi to Mogul, the guest house all the PCV’s who have business at the Zambian PC headquarters stay. Checked in, started to walk to the office but, as it was then dark, wasn’t certain where the headquarters was so I went back and met the other PCV’s who was staying there then decided to splurge on Chinese food because I basically hadn’t had any since I left Connecticut, however it wasn’t the best dish I’ve ever had. Got to bed later then I wanted so I probably won’t get quite as early as a start as I wanted.

2008 07 19
Well again the power was out in the morning so I couldn’t work on my laptop without draining the battery. I was also going to go to Shopright, however their generator was broken so they were closed and would not open until 1200. I think the power came back on before 1200 so I might have worked some on my laptop, then I went to Shop when the time was right, packed everything up to leave before dawn tomorrow and did something else which might have involved eating dinner and conversing with other PCV’s, although I’m not sure. I went to bed early